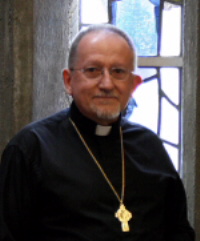 Father Stu was ordained to the Priesthood by The Most Rev Mar Iohannes IV on the 10th of May 2008. He was previously ordained as a Deacon on the 8th of September 2007. The Rev Father joined the Apostolic Johannite Church in 2004 and entered St. Raphael the Archangel Theological Seminary in 2006.

Father Stu was raised in a liberal Christian environment within which he was both Baptized and Confirmed. He was very active both at the parish and diocese level and became a licensed Lay Reader. Seeking a more personal and connected understanding of his place within both the physical and spiritual worlds, Father Stu moved away from this environment.

In 1995 he was introduced to the riches of the Nag Hammadi Library, the Gospel of Thomas and the world of Gnosticism. Thanks to many hours of research and reading and eventually much wonderful time spent with Fathers Jordan and Ken and Iohannes IV, the future Father Stu realized that he had found a home within the Apostolic Johannite Church.

Father Stu teaches full time at an undergraduate business school, he holds a doctoral degree in education and he and his wife help raise their granddaughter.

Father Stu enjoys a pastoral role: one where he can provide spiritual support to those seeking an understanding of their place within the broader community of the Divine. He continues to challenge himself on a clearer understanding of Gnosis and he knows from past experience that continued dialog in the form prayer as well as shared peer experiences help open doors to an understanding of life’s journey.

Many of us seek a real spiritual community which is loving, inclusive, spiritually lively and empowering of people of all genders, races and sexualities, both rich and poor. The Johannite tradition represents just such a community: founded by Saint John the beloved disciple of Jesus, rooted in the tradition of John the Baptist and guided by direct, experiential contact with the Divine, this tradition encourages personal responsibility and freedom of thought and practice. more