The Apostolic Johannite Church and the Archdiocese of Wisconsin are pleased to announce the upcoming Ordination to the Sacred Order of the Diaconate for the Rev. Mr. Jason Htet Campbell

Jason Htet Campbell grew up in Burma (officially Myanmar) in a Theravadin Buddhist household. After wandering around and learning about different forms of philosophy and religious thought during his teenage years, he found a home at the Apostolic Johannite Church in 2011.

In 2010, he moved to the Pacific Northwest to receive a degree in Economics at a small liberal arts college. He is now working in an economic development organization in Portland. 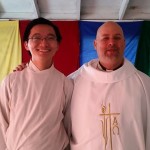 He currently helps Msgr. Scott Rassbach in running the Rose Cross Community in Portland, Oregon as a minor order cleric. He is working to create a vibrant, active, and fun community in the Portland area

Jason will be ordained by His Grace, Mar Thomas, Primate of the United States at St. Sarah’s Parish in Boston, MA during a Pontifical Mass of the Apostolic Johannite Church at Conclave 2016, on May 14th, 2016- the Feast of the Apostle Matthias.