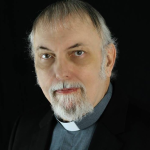 Born in 1952 in Louisville, Kentucky, Bill Thomas was raised in a Scots-Presbyterian home and grew up on a farm in northern New Jersey. He spent much of his childhood showing American Saddlebred horses and roaming the woods. As an adult, he was a corporate trainer and continued an active church life serving as a teacher, childrens department director, and ultimately a Junior Warden in an Anglican Church, and a hospital chaplain. He has seven children, eight grandchildren, and served for over twenty years, in varying capacities, as a Boy Scout leader. It was not until his retirement in 2006 that he began to explore his interest in spirituality, mythology, and esoteric traditions. He joined the Ancient Order of Druids in America (AODA) in 2008, completed the Druid Apprentice grade. He continues to work on Druid Companion studies and the Dolmen Arch Mystery School. As a member of Ár nDraíocht Féin: a Druid Fellowship (ADF) he served as the Managing Editor of Oak Leaves – The Quarterly Journal of Ár nDraíocht Féin and was elected Pennaeth (Chieftain) of Tylwyth Y Ddraig Goch: Clan of the Red Dragon. He also served for four years as the Chief Druid and Priest of Whispering Oaks Grove in north central Florida. Currently he is the Knight Grand Commander and Knight Commander of the Di’Jon Commandery (Florida), Priory of St. John in the Ancient Gnostic Order of Knights of the Temple of Solomon, a Deacon in the Gnostic Celtic Church, and the Albigensian Gnostic Catholic Church. He holds a Master of Divinity, a Ph.D. in Comparative Religion, and is a Board Certified Hospital Chaplain. He continues his studies in Comparative Religion and Mythology while working on his family genealogy, and hosts an informal study group in his home. He is currently working on several projects including writing an historical fiction novel about Iolo Goch and Owain Glyndŵr.