Ordination to the Priesthood: John DiGilio

The Apostolic Johannite Church and the Archdiocese of Wisconsin are pleased to announce the upcoming Ordination to the Sacred Order of the Priesthood for the Rev. Deacon John DiGilio

John DiGilio is the Senior Director of Research & Intelligence for LAC Group’s LibSource division. He has 20 years of large law firm library and legal information vendor experience. John has proudly been affiliated with such industry standouts as Thomson Reuters, K&L Gates, and Reed Smith LLP where he was the National Manager of Research Services for almost a decade.

John is very active in the law and law library communities. He has written for numerous regional
and national publications as well as taught college and graduate courses in such topics as business ethics, e-commerce, fair employment practices, research methodology and business law. He also enjoys talking about technology and leadership to various library organizations and has spoken all over the United States, Canada, and even the Caribbean.

John earned his Juris Doctorate from Pepperdine University School of Law and his Master of Library & Information Science from the University of Pittsburgh’s School of Information Sciences. He is the founder and Editor-in-Chief of On Firmer Ground, a blog by and for law firm librarians, and his own information tech blog, TILT. He is also the co-editor of the popular
Pinhawk Law Librarian Digest. 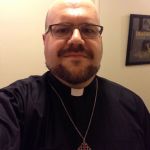 Ordained to the Diaconate for the Apostolic Johannite Church in 2013, John has served AJC Communities in Chicago and Kenosha and now serves as Rector to the parish-in-formation of St. Joachim of Fiore in Los Angeles, California. In addition to his work as both rector and assistant to several AJC communities, Rev. John also serves as the Chief of Staff to His Grace, the Primate of the United States.

Rev. John will be ordained by His Grace, Mar Thomas, Primate of the United States at St. Sarah’s Parish in Boston, MA during a Pontifical Mass of the Apostolic Johannite Church at Conclave 2016, on May 14th, 2016- the Feast of the Apostle Matthias.