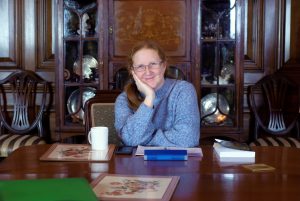 The Apostolic Johannite Church is pleased to announce an addition to our Conclave lineup – Sophia: Gnostic Goddess, Lunar Goddess, Goddess of Wisdom with T. Scarlet Jory

T. Scarlet Jory is a university graduate with Bachelor degrees in Classics/Anthropology and in Honors Religious Studies/Adult Education. She is working on her Masters Degree in Religions & Cultures with a dual focus on Paganism and East Asian philosophies. One of her passions include writing and inspiring people to read, to research, and also to write. Her other passion is tea. She is a published author with two book in print (and more to come), a chapter in an anthology, two anthologies she edited, and several articles. She spoke at the Parliament of World Religions this November 2018 in Toronto. Currently, she is finishing her Masters degree, aiming to graduate January 2020. Her research topic for her Graduate Research Paper is Tea and Religiosity in Ch’an Buddhist Temples: A look at how tea is used in religious contexts.

While she is a parent of a toddler, she is also a teacher and spiritual guide for the Montreal Pagan Community. Scarlet founded Concordia University Pagan Society and ran as its president and on other executive positions during both her undergrad degrees. Now she runs a program called Crescent Moon School that teaches the foundations of Paganism and helps those seeking to find their paths. She also runs workshops, discussions, meditation lessons, spiritual events and two major craft fairs with accompanying presentations annually.

Springboarding from some of the early lore and understanding of Sophia, women have reclaimed her within feminine spirituality. She is both a goddess of wisdom and experience, which lends well to those devoted to a more Pagan path. This talk will be a short introduction to Sophia, followed by a description of how she fits as a matron goddess within a Pagan framework of spiritual praxis.

Her talk is scheduled for the Monday morning of Conclave 2019.