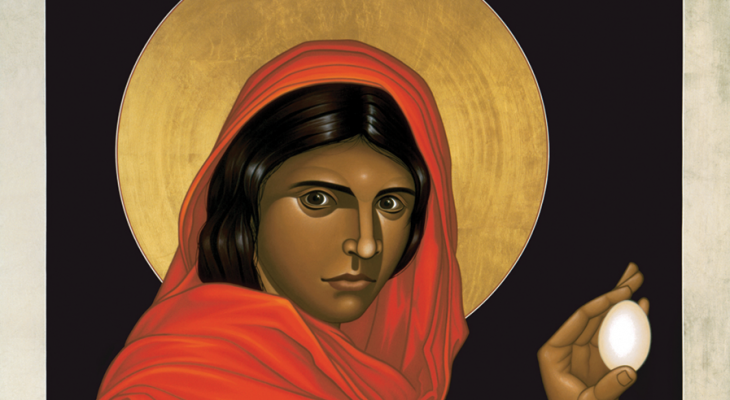 My intent with these short essays has been to trace parallel female figures to the two Johns depicted in the Introduction course – Mary Theotokos parallels John the Baptist, Mary of Bethany parallels John the Beloved. In the course of those explorations, we discover that the parallels aren’t direct – both Mary images deepen as well as mirror the John images. These are people after all, not mere symbols; they are themselves.

So let’s take one more step by looking at yet another Mary – the Apostle to the Apostles, the Disciple beyond compare, The Magdalene.

The image for this blog is an icon by Robert Lentz depicting a traditional story about her.

One tradition concerning Mary Magdalene says that following the death and resurrection of Jesus, she used her position to gain an invitation to a banquet given by the Roman Emperor Tiberius. When she met him, she held a plain egg in her hand and exclaimed, “Christ is risen!” The Emperor laughed, and said that Christ rising from the dead was as likely as the egg in her hand turning red while she held it. Before he finished speaking, the egg in her hand turned a bright red and she continued proclaiming the Gospel to the entire imperial house.

What I love about this story is that it vividly depicts Mary’s personal power. She isn’t a timid follower of Jesus, she is a significant woman of renown who stands up to emperors to speak the truth. In the canonical gospels, she communicates the news of the Resurrection to the apostles, but in gnostic scriptures like The Gospel of Mary, she goes much further.

[…] Mary stood up, greeted them all, and said to her brethren, Do not weep and do not grieve nor be irresolute, for His grace will be entirely with you and will protect you. But rather, let us praise His greatness, for He has prepared us and made us into Men.When Mary said this, she turned their hearts to the Good, and they began to discuss the words of the Savior.

Peter said to Mary, Sister we know that the Savior loved you more than the rest of woman. Tell us the words of the Savior which you remember which you know, but we do not, nor have we heard them.

Mary answered and said, What is hidden from you I will proclaim to you.

… and she does, laying out a complex doctrine of human freedom attained by defeating the hold of the ruling powers over the human soul. Peter – never the sharpest chisel in the toolbox – doesn’t follow.

Mary depicts a human being entering the fullness of spiritual insight, the Word flowing through her as she teaches. She isn’t merely one who has learned, she is one who Knows.

What’s Johannite for me about this image isn’t her forthrightness or her certainty, it’s her transformation.

The Magdalene earlier in the gospels is a much milder, more humble figure. Prior to the crucifixion, she is one among the followers of Jesus – but as the story advances beyond the death of Jesus, she emerges as this striking, powerful figure. Just as we see with the later stories around St John, Mary is depicted undergoing a profound transformation from follower to teacher.

This transformation also depicts a crucial aspect of the Johannite understanding of Jesus as not merely teacher, but as an exemplar – his life depicting a path which others… which we… might follow. This is crucially different to the Jesus most of us grew up with who is a singular figure worthy of devotion and worship, but not someone we might hope to emulate.

For us, Mary Magdalene (and John the Beloved later in life) depicts full human spiritual maturity, which is not simply to echo Christ, it is to be Christ – to fully realise throughout your being the total unity between the Logos and human nature.